Good day world travelers! Since I am unhealthily obsessed with museums, I thought I’d write another sneaky post about the multitude of painted beauties cloistered within the Kunsthalle in Hamburg, Germany. Although Hamburg has at least fifty museums, I chose to wander around this specific one because of its stunning Renaissance, Baroque, and Romantic collections. I also trekked to the Miniatur Wunderland Museum, an exhibition featuring model trains and landscapes on a miniscule level. To be honest, this Museum was a gimmicky bust that I would not pay for again. To behold the whole diminutive landscape of the Alps under my nose was interesting, but it wasn’t the greatest display I have ever seen. Also, the tiny “America” was not tastefully done and showed lack of skill, particularly in the muddy brown desert that was supposed to be the iconic “Wild West.” However, it was of no matter that this miniature collection was a disappointment; the mind-blowing gems of the Kunsthalle made up for the overrated trains a thousand times over.

Outside of the Kunsthalle!

Literally “art hall,” this red-bricked giant of classical design was completed in 1869. An original art foundation had already been established in the growing port city, but a grand building worthy of the priceless collection was soon needed.  When I traipsed along the so-elegantly-christened Glockengießerwall to reach the museum, I discovered that the classy outward dome (the Kuppelsaal) was being reconstructed. In fact, a large portion of the collection was relocated to the adjacent museum while renovations were under way. When walking to the new entrance hall, you may feel the stares of countless esteemed artists piercing you from above. Placed into the brick niches of the Kunsthalle, sculptures of these artistic giants coolly guided the way to the canvases, similar to the Italian studs in Florence at the Uffizi Gallery. Regular tickets were 12 euros, but this was a meager sum considering you got to goggle shamelessly at images by Caspar David Friedrich, Kirchner, and Fragonard! The building felt so modern, clean, and devoid of texture, especially the white walls smooth as a freshly cleaned mirror. The Kunsthalle is famous for a sprinkling of works, and it is those jaw-dropping pieces that one first sees when entering the main collection.

Money. God. Big, manly cars with “vrooming” engines and lift kits. A triple chocolate brownie with extra fluffy whipped cream dalloped on the top. Whatever the case may be, certain objects or people make you tingle inside and feel so completely whole, at home, and content that nothing in the world could color your vision of perfection with gray while that ethereal or physical “thing” is within reach.  For me, drinking in the beauty of paintings inside a hushed museum space is the most filling and enjoyable feeling. In the Kunsthalle, I could leap wildly and crazily in my mind because I got to gaze at a portrait by Rembrandt, a smoothed marble statue by Bernini, and an idyllic classical seascape by Lorrain! Although the random art installations were strange, the dimmed lights of the Baroque collection pushed those modern eyesores from my head. Also, there weren’t that many patrons loitering about the place, and I was beyond happy that many people weren’t taking photographs left and right. There were three paintings in particular that piqued my interest immensely, only one of which is considered world-renowned and artistically “famous.”

Wanderer Above A Sea Of Fog, Friedrich

This iconic piece, arguably the most sought-after and valuable work in the collection, is Wanderer Above A Sea Of Fog by the raging German Romantic Caspar David Friedrich. Crafted tempestuously in 1818, this intriguing scene depicts a lonely, tiresome man gazing out into the void of the rushing, rocky sea. Something about it is so forlorn yet also excitingly adventurous; that craggy outcropping of rock in the distance could be a new island waiting to be discovered. The man’s face is also hidden from the viewer, enhancing the mystery and tension. What surprised me the most was that I always thought the Wanderer’s fitted coat was dark blue—however, it’s actually a rich emerald color! Wanderer Above A Sea Of Fog is on the adjacent wall to The Sea Of Ice, ­another flooring image that Friedrich willed into being in 1834. The jutting finger of ice loudly bisects the canvas in the middle, creating a natural cacophony that is so powerful and unforgettable. There isn’t a person in sight to anchor this scene with tame humanity, but its wildness is what makes it so appealing. Friedrich did sketches of the Elbe River in Hamburg to prepare for this replicated monstrosity! 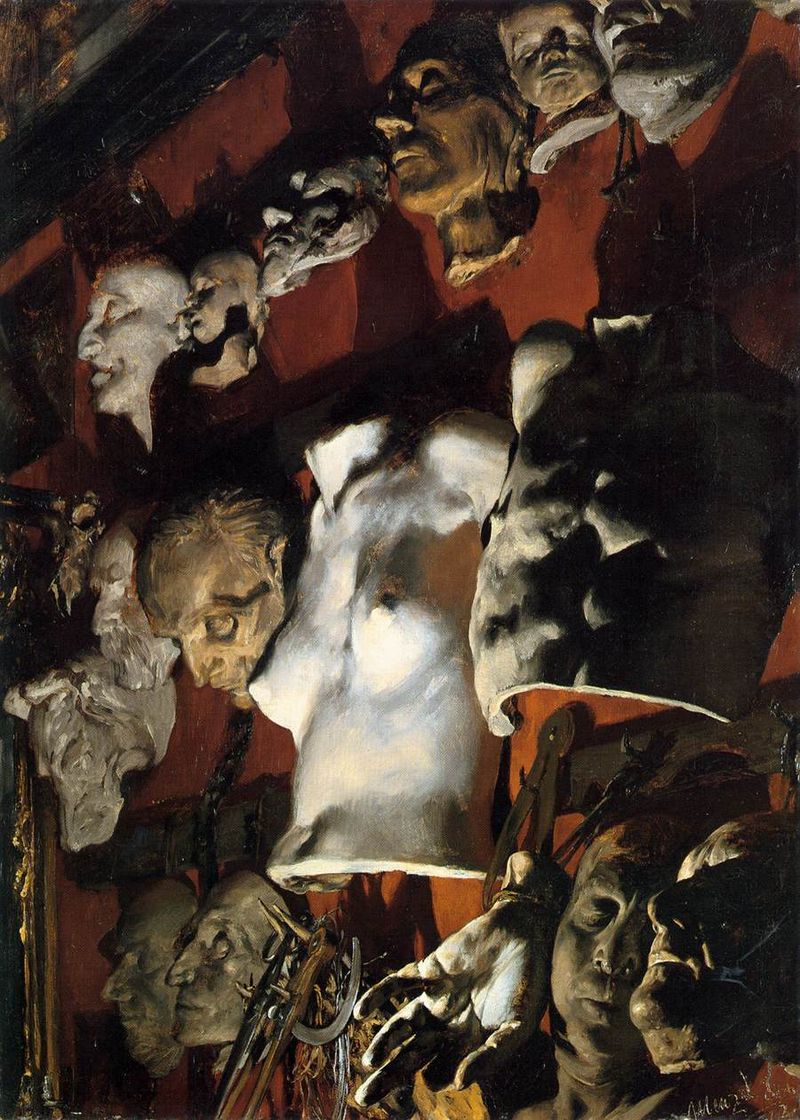 I was also quite smitten with Studio Wall, a haunting, disembodied scene painted by Adolph Menzel in 1872. Neo-Baroque in style but historically Romantic, this painting is loaded with multiple layers of eerie meaning. To begin, the chiaroscuro highlights the Venus de Milo torso, not so beautiful and captivating in this unflattering green light. Keeping her company is the writhing (but ideally chiseled) torso of Laocoon from the renowned Laocoon and Sons sculpture from antiquity. Besides these creepy casts in some macabre artist’s studio, another layer, this time directly relating to death and decay, becomes apparent in the appearance of scissors and thread at the bottom. These are the doomed tools of the Fates, the three women who weave the thread of life, decide how long your life will be, and cut it brutally with a sharp “snap” to end your being once and for all. Menzel must have been feeling rather dour, especially since a funerary mask of his deceased friend is also present next to Venus. To be honest, I had no idea about this deep (and chilling) meaning when I first viewed this image. The ghostly lighting, the hint of delicious tenebrism, and the floating body parts were just so riveting! The Liebermann collection was impressive as well, but I experienced more visual delight with Staircase Scene, a juxtaposing contradiction created by Oskar Schlemmer in 1932. The lack of depth and the wide expanse of gray for a background was jarring, constricting even. Schlemmer was the director of the famed Bauhaus Theater, which explains the leotard clad figures moving throughout this shapeless space with sad, almost forlorn faces. They, whether male or female, are confined within mere lines, doomed forever to plod down an infinite diagonal staircase with no end in sight. Although I’m not the biggest proponent of nonrepresentational modern art, I love the figures anchoring the foreground and background as well as the minimalist vibe.

Interior of the Baroque Gallery

Interior of the Baroque Gallery

Bust of a Cardinal by Bernini

To conclude, the Kunsthalle Museum was definitely a highlight of my two week European jaunt. Many other paintings caught my eye, including ones by Leger, Renoir, and Fragonard. I even ran my eyes over a striking bronze sculpture by Rodin! His treatment of the human body, including rapt attention to contours and muscles, was remarkable. Find out more about the Kunsthalle Museum here. Read about my thrilling museum crawl throughout Europe here.