Good evening world travelers! First of all, I heartily apologize to my readers because I often neglect the “food category” tacked onto the list of topics I discourse upon on the right hand side. It’s such a shame! Food is flavorful, elegant, a true craft, and has the ability to conjure up memories that you didn’t even know you still harbored in the sentimental recesses of your mind. For example, I inhale one brief whiff of curry, and I’m transported back to my Auntie Bharti’s house in England, her remarkable cooking overloading the senses with aroma and history. Because I’m an obsessive writer with an even deeper fixation on delicious food, I decided to document every meal I ate while traipsing through Switzerland and Germany—let all stomachs be jealous because for two weeks, I had full meals worthy of King Ludwig or Rudolph of Swabia!

June 4th—I was completely jetlagged, hadn’t hit my head on a pillow for over 24 hours, and was walking around in a state of Swiss delirium when my taste buds first exploded with European cooking. In Engelberg, I stayed at the Banklialp Hotel, a beautiful inn nestled at the foot of the breathtaking Alps. This first night, my family and I dined with local friends while passing around copious amounts of beer and homegrown wine (i.e. Dornfelder). While the others were chatting away in a smattering of German and English, I was inhaling chicken cordon bleu, a wonderful affair that involved layers of creamy thick cheese (grown at the cheese factory down the hill) and caramelized vegetables.

June 5th—Drifting away from the comforts of our quaint Banklialp abode, I walked a total of 500 steps to the Alpenclub, a ritzy restaurant with gorgeous views of the expansive Alps from its patio. The air was so brilliantly clear and the water so icy cold that I could taste the Alps rolling over my tongue and teeth. The fresh beef stroganoff I devoured was as gorgeous to the taste buds as the stunning view was to the eyes. In Switzerland, the crispy bread that serves as the appetizer is nothing like the thin slabs of white cardboard that Carrabbas offers its guests. This bread was hearty, chalk full of seeds, and thicker than a risen pound cake. The airy rice that accompanied the beef fiesta soaked up the scrumptious sauce without being too heavy.

Beef Stroganoff at the Alpenclub

June 6th—On this day, the cheesy goodness of Swiss fondue was revealed to my mother and I in all of its creamy, thick, and heavy glory. Sharing a pot between the two of us, we still couldn’t finish the abyss of curdled milk because our stomachs were fit to burst with flavor. The tsunami of cheese wasn’t the only foe to conquer; to dip into the sauce, we were given cubes of bread, boiled potatoes, and pearl onions. The spread was fantastic and completely fitting for the generous Banklialp Restaurant. 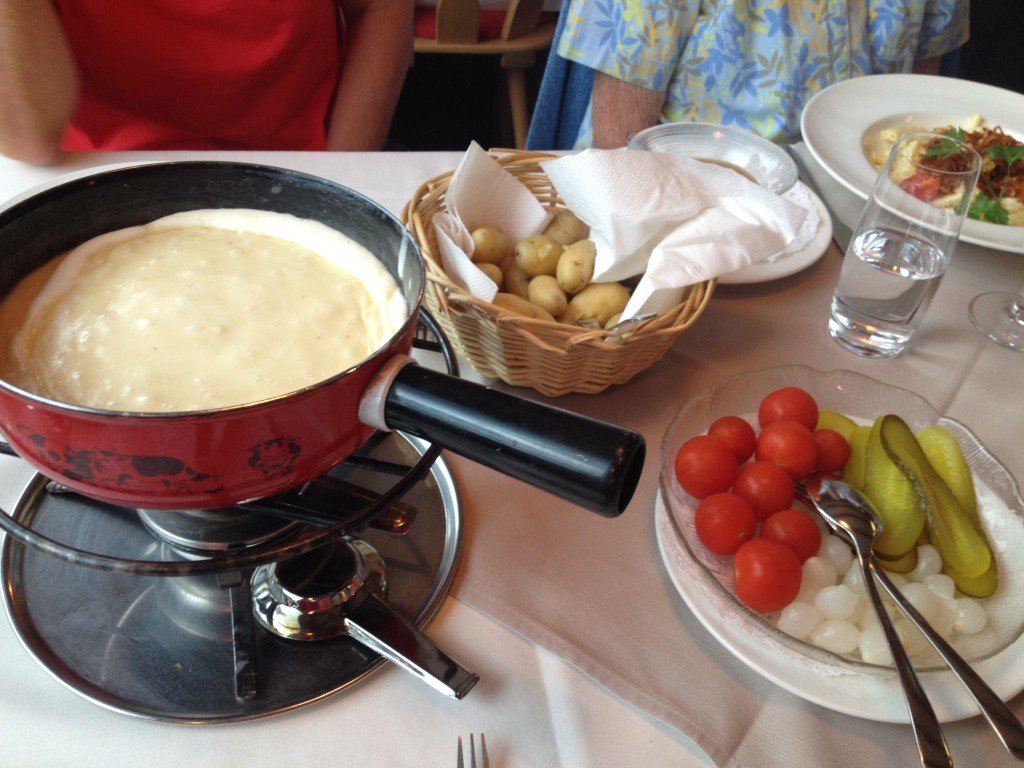 June 7th—After abruptly waking up from the fairytale of Engelberg, I found myself in the heart of the German countryside at Zum Kelterhaus, a lovely inn in Ober-Hilbersheim. The atmosphere was so bucolic and quaint, as if nothing could disturb the wheat fields blurred to the horizon, the giant windmills, and the peaceful cemeteries. Driving into nearby Sprendlingen, my family and some humble friends of ours ate at Weingut Huth, a hole in the wall bar/restaurant that was packed with customers smoking away on the patio. Opting for the cozier (and less smoky) interior, I was kept company by dark paneled walls, spotted flooring, and ancient lamps. I ordered Speckpfannkuchen, basically a glorified crepe filled with pieces of meaty bacon sprinkled throughout. Despite its unhealthy content, IT WAS SO DELICIOUS. I ended up eating almost the whole thing even though it was the size of a pizza pie.

June 8th—Because my grandfather has made pilgrimages to Germany nearly every year for over fifty years, he has friends sprinkled throughout the beautiful country like push pins on a corkboard. This night, we had a German style barbecue at our friends’, Volker and Margit’s, contemporary house. The generous couple outdid themselves for us, preparing white asparagus (“spargel” in German), an array of freshly cooked meats , pretzel bread, potato salad, and a velvety appetizer made of dill and quark (a cheese similar to cream cheese or smooth ricotta). Everything was bursting with flavor, and I couldn’t be more grateful to our easy-going and hardworking hosts.

June 9th—This was the day that my stomach died. And my senses were obliterated. And my eyes were stunned out of being because of the enormously peculiar meal. Trundling into Linden, a minuscule town on the outskirts of Medieval Rothenberg, my family and I stayed at the surprisingly modern Gasthof-Linden hotel. Dinner there was a shocking but amusing affair, as we were served the largest hunk of meat I have ever witnessed. A large, steaming plate of whole Kalbshaxe (a giant veal shank/knuckle) was plopped in front of my shocked face. The meat was leaking juices so flavorful I got past the rather sad idea that I was digesting strange body parts of a baby cow. The meat was stringy yet tender and on the rougher side (as opposed to a butter-like lamb shank). Looking like dollops of whipped cream, sticky potato balls (clumps of potato mixed with flour and parsley) were also served.

June 10th—Again, we had a barbecue style dinner at our relatives’ house on the outskirts of Wurzburg in Schwebheim. These same relatives own a network of Walther gas stations throughout Germany; I had the chance to visit their distribution sight in Wurzburg—it was incredible! Massive barges lined the tiny waterway and soaring petrol tanks clouded the skyline with gray geometry. Dinner at their house that night comprised of homemade deer sausage, mountains upon mountains of white asparagus, and wild boar patties. It was quite interesting; surprisingly, the deer sausages were to my liking in my delirious state (I just had half a glass of strong Aperol!)

June 11th—Hamburg is a bustling, dirty, hipster, modern, and typical European city grounded in industry and shipping. The Brobdingnagian port of Hamburg was mind-blowing because its proportions were simply too massive for me to comprehend. Barges larger than multiple skyscrapers stacked horizontally, cranes and claws that could lift a whole house and plop it down the next street, millions of brightly colored containers arriving from China and Singapore…it was flooring. Dinner that night in the basement of Das Dorf, a college-like bar, was also jaw-dropping, albeit in a more aromatic way. I ordered rouladen, a lip-smacking masterpiece of steak, bacon, carrots, and pickles rolled together in a bun. The meaty sauce drizzled over the thick roll-ups and the whipped potatoes was heaven in a thick, brown liquid.

June 12th—Sharply breaking away from the German tradition, my family and I decided to dine at an Italian restaurant in Hamburg for a change. After eating more white asparagus than I thought was humanly possible, I was hardcore lusting after penne pasta, tomato sauce, and meatballs. Casa di Roma, a classy restaurant on a dusty street subject to road construction, did not disappoint. My wish of calorie-ridden penne and meat sauce was met with an Italian gusto that knocked me over with sensory pleasure. I also snagged a bite of my mother’s white asparagus ravioli; despite never wanting to eat spargel again, it was admittedly delicious and melted in my mouth. Plus, the owners (and most of the cooking staff) were Indian and delighted in the fact that I was half Indian, half German…

Jun 13th—Leaving the seedy streets of Hamburg for the historically momentous ones of Berlin, my family ended up dining at a restaurant on the outskirts of Berlin in Schӧneiche, a small suburb harboring only a few thousand citizens. The Tannenhof was a beautiful building enclosed within pine trees and featuring a small train set for the amusement of all, not just small children. Laughing inside in the warmly lit interior, my family explained our German and Swiss adventures to Peter, a truly amusing and genuine character of a man filled with humility and entertaining tales. My deep red wine was smooth, my grilled chicken was doused in a flavorful bisque, and my sautéed carrots inundated the plate with natural sugar. However, the most thrilling part of the meal was the handful of spätzle fries that ended up stealing the culinary show. They were so springy, doughy, loaded with delightful spices, and addicting.

June 14th—This was the day my eyes beheld the Brandenburg Gate, an entity too important, too striking, and so unbelievable to describe in words. I walked sadly along Checkpoint Charlie in Friedrichstrasse. My ears were in ecstasy listening to the amusing Magic Flute Opera by Mozart. Before driving to the Deutsche Oper Hall, my family and Peter ate at Tulcholsky Restaurant, a famous establishment in Berlin known for its top notch cuisine and literary history (Tulcholsky was a famous writer). Although our waiter was a snobby jerk with unskilled tattoos littering his skinny arms like a toddler’s sharpie doodles, my meal was an exhilarating ride for all senses involved. I ordered the lovely-named “Kalbsgulasch,” a meaty concoction loaded with veal, beige gravy, and a mountain of skinny spätzle. Doughy pasta and a Mozart composition? The night couldn’t have gotten any better. ;)

June 15th—I was injected with every stereotypical aspect of German culture this night, but my dinner was to-die-for, and I left very contented and faintly jingoistic. The Hafbräuhaus is a famous restaurant, bar, and store in Germany, the first complex being built in Munich (although the idea of the Hafbräuhaus originated in the 16th century!) The restaurant in Berlin was a massive compound overflowing with beer, busty girls in dirndls, attractive male waiters in lederhosen, kitschy German drinking songs, and piles of meat and pretzels. Yes, the overt display of German culture was rather fake, but it was still pleasant eating my mini bratwurst and perfect potato salad with my grandparents, mother, and the ever-amusing Peter. Learn more about the Hafbräuhaus here (one is being built in St. Petersburg, Florida now!)

June 16th—The last night of my wild and educational adventure in Germany was spent at Mutter Hoppe, an authentic food haven that was in the basement of an antiquated building in Berlin. The decorations bedecking the place were so cozy and oozed of gemütlichkeit: checked table cloths, tarnished cooking utensils lining the window sills, an ancient stove staking its claim on the buffed floor….it was enchanting. I was ravenous because my mother and I trekked to the East Side Gallery of the Berlin Wall without a taxi and only relied on some dinky map the snooty Hilton Concierge deigned to hand me. Looking up our distance on Google later, I realized we had walked 3.5 kilometers (a total of 45 minutes in a sketchy part of East Berlin). The sauerbraten, red cabbage, and potato dumplings were a fierce party in my mouth, especially the German pot-roast that dissolved like runny butter over my tongue. Although my party was composed of three elderly people, my mother, and a cautious 18 year old that acts like she’s 30, we still had a raucous time complete with flaming shots and hilarious tales of years past.

Last night at the Mutter Hoppe

German cuisine is indescribably tasty and a feast for the eyes as well because of its beautiful (and orderly) presentation. I will miss the array of meats, the crowd of cheeses, and the sea of fluffy potatoes, but I’ll just have to go back. ;)