When I’m with you, it feels like walking on electric air. 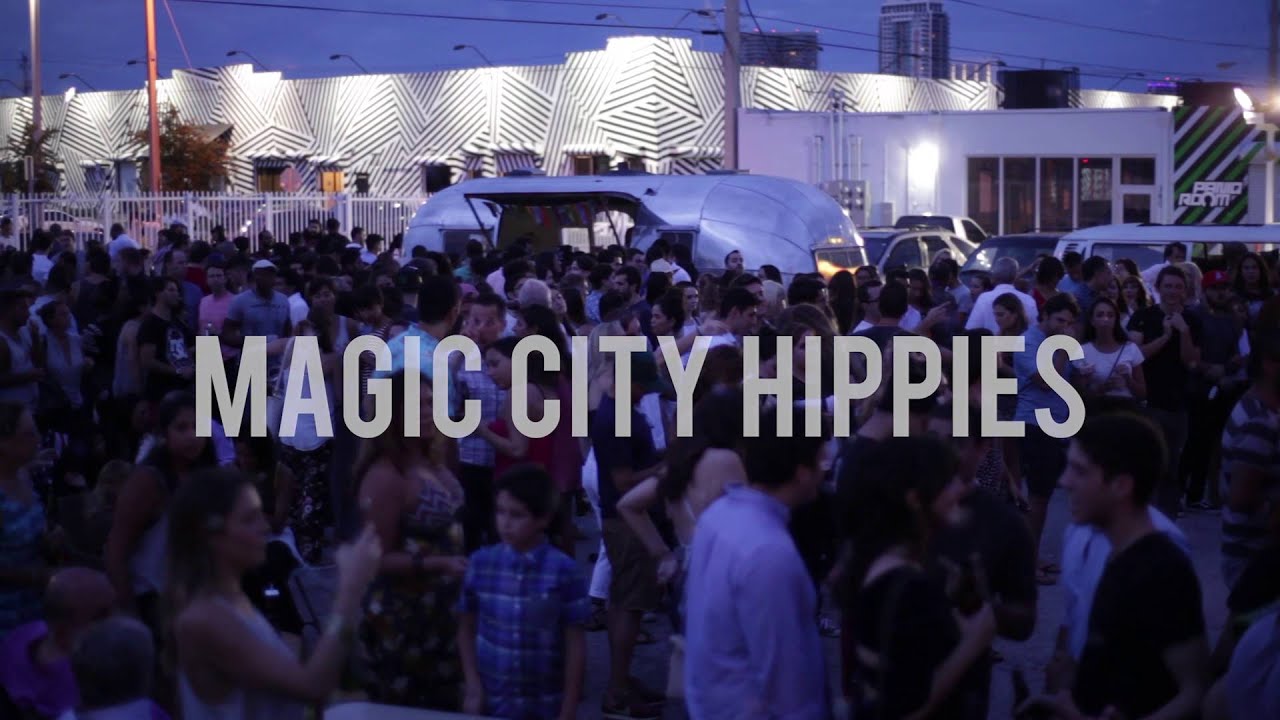 Although this sultry lyric is whispered in the Magic City Hippies’ Fanfare, the presumed affair between two {hipster} lovers extends to my relationship with this Miami band as well. Listening to their tracks –pulled from their Hippie Castle EP – is like crossing into a dream with late-night radio voices and silhouettes behind plum curtains. I usually don’t write articles about indie funk bands, but I thought feeling unearthly and sexy was worth a few words. I first saw them at the High Dive, a muraled joint of cigarettes, dirty cups, and Gainesville teenagers – it was a coincidence they were the headliner since I was there for Flipturn, a Fernandina Beach band of long hair and vanilla shoes. Of late, I’ve only been happy at the High Dive since it has anonymity, darkness, and music so close I can touch it – and it’s a temporary Band-Aid on my daylight problems. I was expecting MCH to be Flipturn #2: head-thrashing, youthful, and the indie music that satisfies my dancing urge without plucking up emotions. Maybe it was the age gap or my state of mind or the sultriness of it all, but Magic City Hippies was anything but $8-at-the-door fuzz.

#Charleston Hippies! We'll see you TONIGHT at the @chspourhouse for an 18+ show with @beachtigermusic 🤘 Doors at 8 #RoadToRoo

You know it’s a great concert when toes are bruised and hair is an unattractive, flat mess. Couples were sucking lips to Hush ­– Limestone was admitting to loneliness – and Four of a Kind was rounding up my recklessness and letting bra straps slip. I better go all in. I fell in love with everything and nothing during Heart Wants, and I didn’t know bitter-sweetness could be expressed through music.

I also adored the straight guys dancing sporadically in their own pools of sweat. Because that’s the pull of Magic City Hippies: the audience doesn’t have to zipper reactions or pretend the guitar riffs are simply “cool” instead of affecting, sexy, and ethereal. Maybe I was the one bizarre girl swaying in her Hippie tree, but I cared more about the music than how people perceived me. Everyone was faceless – half-clothed around me– while Robby Hunter’s voice was kaleidoscopic and only a few feet away. Brnt and Bull Ride were the two familiar songs, and I screamed “we’re gonna burn this motherfucker to the ground” like I was an indie funk conoisseur. Bull Ride was the encore, and I somehow got entagled with a group of long-sleeved, maybe-gay boys who were spazzing out in the second row. Integration is easiest with sweat, tunes, and touch in the foreground, and before long, I was a member of their sweater cult. I left feeling high and achy, the best combination.

Awww yisss 🤘 Finally crossing back into #FLORIDA for the final two shows of the tour! #Tallahassee we'll see you tonight at @sidebartally and we're capping off this crazy journey tomorrow night with all you #Tampa Hippies at @newworldbrewery 📸 | @morgan.winston

I was convinced my temporary obsession with the Hippies was situational; after all, the High Dive’s weed scent and spotlights elevate the most anonymous band to Foster The People or MGMT heights. So why have Flipturn and the Hippies stuck around, downloaded into my daily playlists and dominating Spotify.me? Is the High Dive brainwashing me with their bands or is the quality of talent and lyrics high? Unlike Despacito, I’m not sick after hundreds of streams or bloated on Brnt monotony. On the contrary, I’m surprised Magic City Hippies have stuck around when I’m flighty and break up with boys on the first day of classes \_(ツ)_/¯. Here are a few reasons why: the raspy, Charles Bronson voice is addictive, their songs are conducive to solo runs and dance parties, and the cut-and-paste melodies make every track unpredictable.

I wish every male had a voice as disjointed and eerie as Charles Bronson (?) in MCH songs. A few of his best lines are:

There’s only one color we’re going to paint this town and that’s red….Red like lipstick

She was a beautiful poison, born to drive men mad.

Random snippets like these are out-of-place and unsettling, but without them, the tracks would be a cut under extraordinary. Bronson is the unseen narrator, the set of stage directions the audience isn’t supposed to see – but it adds more of a storyline to the songs. Also, it’s the tone of voice in which they are delivered: delirious, scratchy, and retro, like they were ripped from my mom’s record collection. However, I’m still confused about the Charles Bronson reference, especially when the actor died in 2003. Despite the gray origins, it’s disturbing how much emotion is pulled from these unrelated fragments. I’m a sucker for smarmy, beautiful word puzzles, so pretending like some guy is whispering these words about me is pretty. {which only feeds into my unrealistic expectations of boys, but there’s nothing wrong with having Magic City Hippies standards}.

According to Spotify.me, “74% of your tracks are danceable” and “72% of your tracks are energetic” – which is hilarious given my state of mind! Either way, Magic City Hippies rhythms make nights at Gainesville Place apartments a lingerie, dance, gin+tonic, and bucket hat party. I’ve enjoyed being alone and serenading my succulents with “Oh my future so bright man, you know I got to wear shades” since my roommates are never home. Running at Southwest Gym makes the 9 laps a tizzy of “high up on MDMA.” Hush earned a solid place on my Nutter Butters playlist, its melting cords and “God I’m dedicated to you” preparing me for sex. Before I saw MCH live, I assumed their songs were the same hipster stew, but I was wrong – they’re split between sensual (i.e. Hush) and high-energy (i.e. Brnt), all of them reminding me of High Dive madness and badness.

Finally, I haven’t broken up with Magic City Hippies because their work is the audio version of a writing compilation. I’m no music theory expert, but the chopped-up clips – rapping mixed with singing – and unusual noises make each track a collage. This is most obvious in Fanfare, a track that opens with a sample of previous songs separated by space-bar clicks. The listener is flipping through an “album” in a musical sense, the family portraits replaced by sheet music and Dive bar performances. The song progresses to a door creaking open, Charles Bronson lecturing on tenacity, and water resorts. The play on words (i.e. “Here’s another one for the dinner plate eyes”) is refreshing, like I’m listening to the literal version of Young, The Giant’s Silvertongue.

When I’m with you, it feels like walking on electric air.

Fanfare and the rest of MCH songs aren’t Malibu Yurt or Way It Goes or any other repetitive, hipster song. They’re interesting to engage with, terrible to fall asleep too. I wasn’t born to be bored, and the Hippies definitely make my Spotify more intense.

#LosAngeles !!! Couldn't be more excited for our SOLD OUT show @thehotelcafe tonight! See you soon! 🤘 Doors at 9, hitting the stage at 10

I know “transcendent” is a heavy word, used too often to describe ordinary things (i.e. a Sam Smith Concert, transgender people). However, listening to the Magic City Hippies – completely sober at that – gets me close to that untouchable state. Watch their strange music video with asses, bear masks, and tennis.